I have a confession: yesterday I was pouting hard-core as I crossed the Golden Gate Dirty 30 finish line. One of the volunteers at the timing mat said that I must not have liked that race at all, given the expression on my face. I didn’t answer him, but the truth was that I loved the run, as I have the last two years (the trail, the mountain, the views!). The reason I probably looked so down was because I was ticked off by my time.

It’s ridiculous, I know, to throw a temper tantrum (even an internal one) about finishing an ultra-marathon slower than your goal.

Last year, I registered for this race determined to better my 2013 time. Instead I was five minutes slower. Several things went wrong that day, but the most limiting factor was that I developed a wicked migraine that took most of my energy and nearly all my will. I was proud to finish anyway, but later I felt a bit robbed. There are few things I hate more than when my pain keeps me from living to the fullest. Usually ultra-running is my way of giving the ultimate “fuck you” to my chronic headache. But last year during the Dirty 30, it said, “fuck you” right back.

One of many encouraging messages on the course. (photo credit to my friend, Molly)

So that’s why this year, I was doubly determined to improve my time. Especially because since September, my headache has been mysteriously – and blessedly – far more under control. In the past nine months, I’ve rarely had bad days. I’ve been able to train harder and faster than I’ve been able to in two years.

Enter my goal of besting my time substantially. And then my frustration when instead I was only a few minutes faster. I know – I still finished! I was still faster! But yet, I was miffed.

The reason I didn’t beat my time is that I simply pushed way too hard, particular in the middle third of the race, and I didn’t save anything for the long, grueling climb up Windy Peak from miles 26 to 28. (That’s how ridiculously brutal this race is. Yes, you have to climb a mountain after 26 miles.) I slowed to shuffle. I tripped over rocks. By the time I summited and had only a few downhill miles left, I was spent. I couldn’t run, or even hike quickly. A gymnast would be able to walk on their hands faster than I moved. 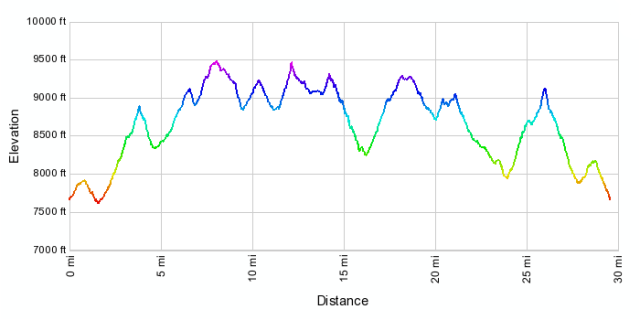 I didn’t make my goal time because Dirty 30 is a tough race. And because pacing is part of the challenge. Sometimes races go our way and sometimes they don’t.

But there is reason to celebrate: By mile 10, I started to get a migraine….just like last year. Only yesterday, I was able to fight it off by tweaking my balance of salt/water/sugar/caffeine (The art of taking care of yourself is truly one of the biggest challenges of ultra-running, even when you aren’t migraine-prone.) By mile 15, the worsened pain was gone and I was fine. Managing a migraine is tough business even from your couch at home. Managing it during hours and hours of exertion is even harder. But somehow I did it. That’s part luck. But also part listening to my body and giving it what it needs, which I’m getting better and better at.

Hooray, right? My success in managing the headache is worth celebrating. And that’s the point I need to be focusing on when I reflect on this experience.

But that doesn’t mean next year I won’t be gunning for that faster time. Trust me, I will be.

This Dirty 30 course was even dirtier than usual, thanks to Muddy May. After a soak and a scrub, my toes still aren’t clean.

One last thing about yesterday’s race: This year fabulous director Megan gave us slower runners the option of starting an hour earlier. That meant that all the elite runners passed us somewhere along the trail. They are incredible, so strong, and so fast. Many of them gave encouraging words as they passed, like “great job,” or “keep it up.” One of the things I love about ultras is the supportive environment. I would love to bridge that gap between their time and mine, but their comradery is one more reminder that it isn’t all about speed.

With Molly – a fellow Medtronic Global Hero – at the finish. It was her first ultra-marathon. So proud of her!