Not the Only Pain Sufferer on a Mountain

I’d like to introduce you to my new friend and climbing partner, Zach. Zach and I have something exceptional in common: he and I both use climbing to control severe chronic pain. 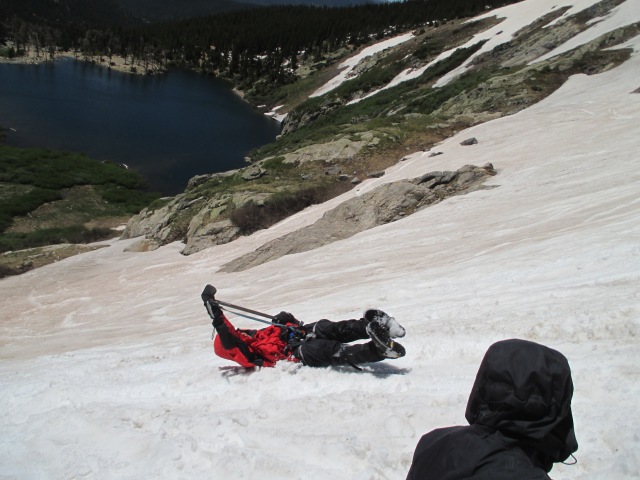 Along with two other teammates, Zach and I will be climbing Washington’s Mt. Rainier this weekend. More on that in future posts, for now I want to focus on Zach:

About nine years ago, Zach was standing near a tree when it was hit by lightning. Though he wasn’t directly struck, the current traveled to his feet, and since then his soles have felt as if razor blades are continuously shredding them. The pain has been so crippling that for many years he was unable to walk.

What changed for Zach? About three years ago, he decided to stop taking pain meds. He says that change alone gave him approximately 30% reduction in pain. (I’ll save my rant on the perils of pain meds for another day.) With that modest improvement, he began to walk. Then exercise. Then hike and climb.

I’ve never met anyone else who, in their greatest moments of physical agony, thinks, “I need to go climb a mountain.”

Zach and I have talked about how difficult it was to begin exercising when, at first, it exacerbated the pain. How sometimes we have to push through harsh pain in order to reach the point where it helps.

He also says that though he typically works out every day, if he doesn’t, he has about a week and a half window before the worst pain returns. I could hardly believe it when he said that – that’s exactly what my experience has been as well. I remember after my first marathon in 2011, I took a break from running. Within a week and a half, my headache grew far worse than I had experienced in years. By two weeks, the pain was so intense I could hardly show up for work. I hadn’t realized until then that running and climbing HELP the pain, not just my emotional state.

Zach and I discussed how afraid we are of an unrelated injury or illness forcing us to be sedentary, even temporarily. We both fear aging and not being able to retain our active lifestyles.

I find it fascinating that though our sources of pain are so different, the method we have found to cope with it is identical, and in many ways the experience of it feels the same.

Sometimes I feel that because I am able to exercise despite my chronic headache, its severity is discounted, especially by other pain sufferers. (“Her pain can’t be that bad if…”) Yes, it is true that many types chronic conditions don’t respond well to attempts at being physically active. But for those of us who are successful, it doesn’t mean that it isn’t difficult. Continuously difficult. Meeting and connecting with Zach has given me the deepest sense of validation – he knows just how hard it was to become physically fit again despite the pain, and sometimes how hard it is to make ourselves continue to exercise.

Zach also knows why I continue to push myself and how the benefit is greater than anything a doctor can prescribe.

I’m so excited for my trip this weekend, not just to climb Rainier, but also to share the trip with someone who lives a similar journey.

4 Comments on “Not the Only Pain Sufferer on a Mountain”