Aconcagua: Half-way up the Mountain

Today is day four of the expedition, a rest day – yay!

On Sunday, day one, we trekked the whole distance from Horcones, the trailhead, to Plaza de Mulas. Traditionally that stretch is broken into two days, but, you see, Matt and I are lazy AF. So instead of hiring one mule to carry much of our gear, we hired two to carry ALL our gear and then we headed up behind them with only enough supplies for a day hike.  (Otherwise we would have needed to carry a tent, a stove, etc.)  We originally thought it would be 22 miles, but it turns out to be closer to 17…I think. They aren’t big on precise details here so instead the map is labeled in hours. Ummm okay! It was a tiring day for me, honestly a little to my surprise. The hardest part was the flattest section which was through sand and against a strong headwind. I was so happy when I finally saw the tents way, way, way in the distance and up a headwall and knew I was almost there. In retrospect I think I was pretty exhausted from days of travel and a very, very long day in Mendoza preparing to come up.

On Monday, day two, we rested. The idea is to let yourself acclimatize as much as possible at Plaza de Mulas before even starting up. Our only jobs were to drink fluids (no, not the whiskey….yet) and eat a lot. Check!

Tuesday was by far my favorite day so far. We took a small amount of gear – mountaineering boots, crampons, some warm clothes, a tent- and carried them up the mountain. My goal was to make it to camp one, Camp Canada, at about 16,500 feet. I went super slow to keep my breathing under control and felt great, much to my surprise. We decided it would be beneficial to cache the gear higher on the mountain, at camp Nido, Camp two, at 18,400 feet, so Matt took the supplies and forged ahead while I kept my speed easy and just went as high as I felt comfortable. Matt has far more experience on big mountains than I do, so he can push a little harder – and I’m thankful! I made it to about 17,500 before Matt met me on his way down. By then the altitude had hit pretty hard so we raced down the mountain back to Plaza de Mulas.

It was incredible to think with every step that I was going higher than I had ever been, pushing further than I thought possible.
Those experiences in life are far too rare. Far too often we only do what we have done the day before and the day before that, stagnating, and we never discover how far, or in this case how high, we can go. 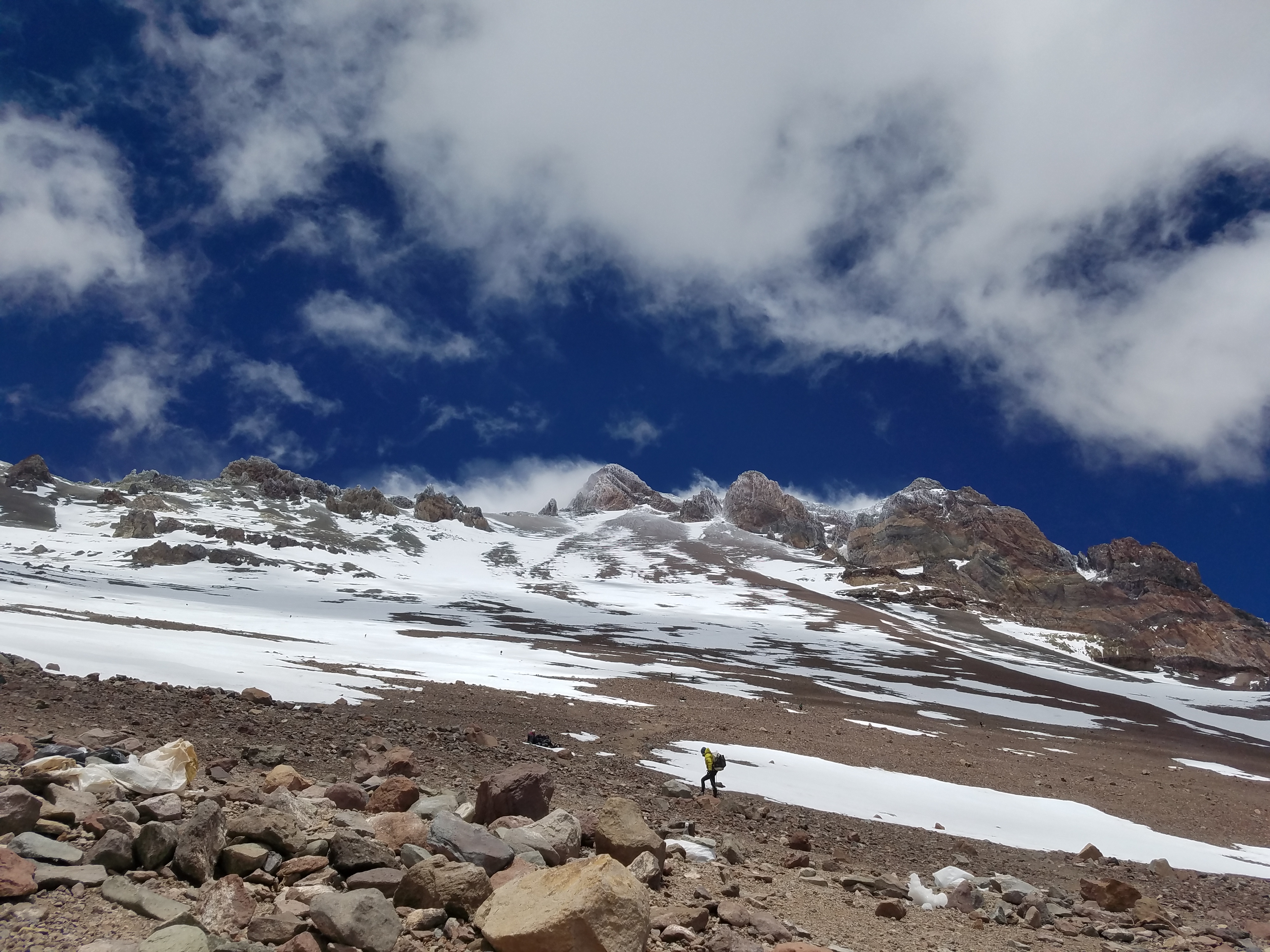 Today, we recover again. Eat, drink, sleep, breathe lots of O2. I might try to de-funkify myself (I reek already) and read a book. I also  might try to figure out how to get a brush through my hair. Yikes.

From here we have some decisions to make. There is a good weather window to summit tomorrow, Thursday, but I know that is too soon for me. Far too many skilled climbers are rescued from the mountain for high-altitude cerebral edema or pulmonary edema. And since this is my first time above 14k, I have extra reason to ascend slowly.

I think the plan will be for me to do one more carry tomorrow, this time all the way to Camp Nido, while Matt climbs a nearby peak. That way we have moved even more necessary gear higher and I’ll have another chance to get used to that altitide. Then we’ll rest again at Plaza de Mulas and wait for another good summit window when winds will not be hurricane force.

Once we do push for the summit, it will be a three day journey: One day to Camp Nido, summit day from and then back to Nido, and one day to return to Plaza de Mulas. Some people have advised us to make it four days instead of three, and to set up one additional camp higher than Nido. The benefit would be a much shorter summit day (still long though). The drawback is the prospect of sleeping at 20k, which is almost impossible. And almost impossible to eat. So that’s one more day I’d  have to go with horrible self care. Plus, long days are my forte. Then again, I’ve never climbed above 22k! We’ll see what we decide. Whatever it is, it’ll be what’s best for our personal style and strengths.

I’m thrilled and so relieved that so far I’ve only had one bad stretch of a nasty headache, and that was last night after climbing to 17,500. I already feel better this morning!

For now: Plaza de Mulas. This place is a world of contradictions. It’s remote and high, and it vascilllates between extreme temperatures quickly. Walking across the Plaza will easily wind you. And yet there are luxuries too: the company we hired for a mule service filters water for us, so we don’t even have to worry about that. (Up high we will have to melt snow.) There’s a wifi tent which is only open a few hours a day and charges a pretty American penny, but it’s wifi! The strangest part is the highest art gallery in the world. The paintings of Acon are unreal. I haven’t asked yet how you get one down the mountain if you were to purchase. I imagine: mule. The expensive guiding companies offer enormous tents to their clients, so large that Matt and I joke Trex must live in one. I bet inside one of those you could even forget you are up here. But doesn’t that get away from the point?

The most fun part is definitely all the people from all over the world who have converged here to climb. Conversations can be hilarious as people piece together Spanish, English, French, and more to communicate with one another.

The sun came up over Acon just as I’m writing this. It’s warm, sunny, and cloudless and should be a spectacular day. Even just sitting here at the base of the mountain (on a rock, of course) makes me exceedingly happy. I’m grateful to be here and grateful to all of you back home rooting me on, as always!

One response to “Aconcagua: Half-way up the Mountain”