Vertical Gain: 3,900 feet to the summit of Mt Evans

Goal: sub 3:00! Last year I finished in 3:03, 3 minutes short of earning an engraved rock. Coming so close to the coveted rock only drove me to want it more…so this past year earning it has been one of my most significant goals.

My headache: Okay, it isn’t as much a “thing done poorly” as it is “shitty thing that happened.” Around mile one, I suddenly developed the type of headache usually caused by drinking something cold too fast. I don’t often experience that type of pain, and I haven’t been able to figure out why it comes when I do feel it. I had to start walking as soon as it started, and every time I tried running again, I felt dizzy. Even just power walking, every step was a struggle.

By mile 4, I was truly thinking of throwing out a thumb and sacking the whole race. 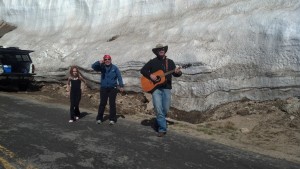 I was thankful for the generous road-side cheer squads.

My headache: Okay, it isn’t as much a “thing done right” as it is “inexplicable reprieve.” Just past mile 9 and after stopping on the side of the road to puke because of the pain, the freeze-type headache disappeared. The relief was so sudden, there may as well have been a “poof” sound effect. Unfortunately by that point, I had blown my pace goals so badly, I was lucky that I was in under the cut-off, and the only thing for which I could hope was just to finish.

That’s the summit, still a little more than five miles away.

Salt Tabs and acclimatization: I took three salt tabs between miles 6 and 9, so perhaps that cured the headache? Who knows! All I know for sure is that the headache couldn’t have been due to altitude, otherwise it would have grown worse, not better, above 13,000 feet. Evidentially my three trips to Mt Evans in the two weeks before the race helped in that respect.

Drafting: The winds were particularly treacherous in the top miles, gusting to over 40 mph. A few of us stuck together to help take turns leading on the switchbacks that directly faced it, but it still cost even more time.

Entering the 2014 mountain running season, I had hoped that this would be the year I would break out of the middle of the pack. Instead, I find myself dealing with levels of pain that I haven’t felt since before I became a runner. At one point during the later miles of the race, I said to someone walking next to me that my time goal “wasn’t in the cards” this year. I started thinking about that idiom and those metaphorical cards, realizing that there might be a lesson in it: what I’m struggling to accept is that I am playing with a different deck of cards than someone who doesn’t have a chronic daily headache. (And in fact, we all have a unique set of playing cards.) It’s heartbreaking to work so hard for this race only to have my chances crushed by my out-of-control pain. But as a chronic headache sufferer, that is my reality whether I acknowledge it or not. 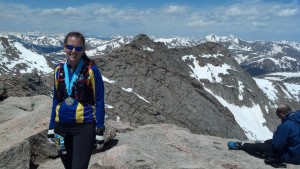 I would rather fight my headache every step than not embark on these journeys at all.